We woke up at 5:45. We were at the metro by 6:50. We caught the train for a couple of stops then changed train and went for 20 stops, to the end of the line. Then we walked, with all our bags to the bus stop were we caught a bus to the airport. At the airport we checked-in our packs. Then we went to the priority lounge until our flight had a gate number and went to board the plane. The flight lasted one and a half hours. We got off and then caught a very very expensive taxi to the 4 star hotel, Novetel. It was a very nice modern building. We stayed one night and got a free buffet breakfast. It was really yummy. We caught a bus and then the people mover to the port.

We boarded the boat very excited and found our tiny cabin. Then we went for a buffet lunch. It was really fun. Every night there was a dress theme and I often wore the electric blue dress with a silver belt that I bought in Berlin (before the cruise).

First our cruise stopped of at Bari, Italy. It was a really nice old town.

We saw a church in a square which was said to hold the body of Saint Nicolas. It was really cool. I liked it because it was kind’a old fashioned. We went to a café and I got an Ice Cream.

Katakolon is a town/port in Greece. Yay! A new country!

It was a very hot day and the town was beautiful. I really enjoyed walking around trying to act like locals and popping our heads into shops every now and then. We found a café and sat down in front of the view of the port that docked our cruise in. Next door was a shop that sold Greek hats so I got a royal dark red one. On the way back we found that some one had left some fishing bait, a hook and a fishing line. We tried catching a fish out of the thousands in the water and I caught one. I got some photos taken. Dad was too chicken to get the hook out of its throat so Mum tried. She couldn’t. There was a man near by and he said that his brother could. With a bit of trouble we got it back into the water free of the hook but we think it died. ): (sad face)

It was my favourite old town. It did have churches with blue roofs. It did have pastel white buildings. We did go up a cable car to get up there and I did a fan it was soooo HOT. It was Santorini! A Greek island. When we got there we looked at the view and wandered around it was sooooo cool (as in awesome cool because it was way to hot for me) there was an amazing view the ports and we even got to try some Greek nuts. They were so delicious. 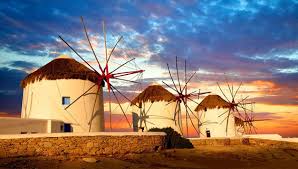 On the same day as Santorini we arrived at 7:00 pm. we were very tired and it was dark. We wandered around in the cold and saw the windmills. The only problem was that the first one didn’t have the roof or the windmill part so it didn’t really count. We also saw a HUGE pelican and LOADS of cats.

Today our cruise docked in the Athens port of Pireus. We decided that the best way to get around was to catch a hop on hop of tour bus. We listened about Athens the hopped of at the acropolis. It was a bit of a dirty city but I quite enjoyed the bus.

This time our cruise docked in a Greek island called Crofu. It was a very nice town and I bought a watch. The town was really nice and I really liked the Gyros we tried which are a traditional Greek food like a dona kebab.

It was soooooooooooooooooooooooooo tidy. It was in Croatia a different country. This place definitely adds to my list of fave medieval old town. It had alleys, old churches and had some steps that reminded me of the Spanish steps in Rome it was a Beautiful place and I loved every thing about it.